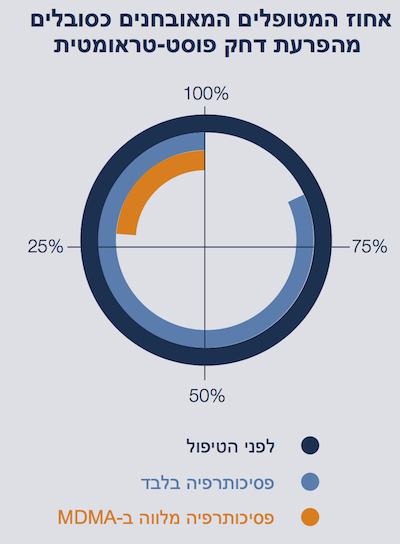 This study has the approval of the Israeli Ministry of Health, an independent Ethics Committee, and the U.S. Food and Drug Administration.

On January 10, 2011, our clinical team submitted the documents detailing our new protocol for our new Israeli study of MDMA-assisted psychotherapy for PTSD to the Institutional Review Board (IRB) at Beer Yaakov, Israel. On January 19, 2011, the ethics committee approved the protocol.

The first subject was treated on April 17, 2013. This study is currently ongoing.

Israeli donors can contribute directly to the study by sending a check or note to Benefesh Hafetza (The Hospital Friends Association), PO Box 1, Beer Ya'acov, Israel, and specifying that the donation is for "MAPS MP-9". Please contact when making your donation so we may thank you for your contribution.

We closed our first Israeli MDMA/PTSD study on March 26, 2010, in order to provide more training to the therapeutic teams and to our independent rater, to improve our data collection processes, and to make several improvements to the protocol. There were no Serious Adverse Events (SAEs) and all patients had been treated without evidence of harm. We have reviewed the data from the five subjects who were treated and found self-reports of healing, but quantitative measures did not correspond.

Born Tel Aviv 1949, Dr. Kotler received his medical education at the Hadassah and Hebrew University Medical School in Jerusalem earning his M.D. in 1976. He completed his residency in psychiatry in 1985 at the TAU-affiliated Shalvata Mental Health Center in Hod Hasharon, Israel. He served as the Chief Psychiatrist of the IDF from 1985-1989 followed by a Fellowship in Biological Psychiatry and Psychopharmacology at the Albert Einstein College of Medicine, New York. Subsequently he served as the Director of the outpatient division of psychiatry in Sheba Medical Center, Ramat Gan, Israel, as well as the Director of the Beer Sheva Mental Health Center, a major teaching hospital of Ben Gurion University where he served as the Chairman of the Department of Psychiatry and Vice Dean of Medical Education at the Ben Gurion Medical Faculty of Medicine. Since 1997, he heads the combined institutions of Beer Yaakov and Ness Ziona Mental Heath Centers. Between years of 2004 and 2006 he served as the Chairman of Psychiatry at the Sackler Faculty of Medicine at TAU. Dr. Kotler is the current Chairman of the Israeli National Council for Mental Heath.

Received his M.A. from Ben Gurion University in Social Work specializing in integrating Artistic and Creative tools. Daniel comes from a Gestalt and Jungian psychotherapy orientation. For over 20 years he has been a Buddhist Therapist and a Senior Instructor of Chinese medicine and Philosophy at the Tmurot (Israeli Integrated Medicine School). Daniel practices Integrative Psychotherapy combining working with the body as a living presence in the here and now of the session—a combination that allows access to the heart of the difficulty and opens the door for change from experience(s). In his spare time Daniel enjoys his baby son and his dog. He lives in rural Pardes Hanna, and dabbles in clay, gardening, cinema and hiking.

Ph.D. in Cognitive Psychology from the Hebrew University of Jerusalem; Senior CBT therapist and supervisor for treatment of PTSD. Developed and directed the Psycho-Trauma Response Program for The American Jewish Joint Distribution Committee (AJJDC) in Israel from 2002-2008. From 2008-2012, he was director of the Training Center for Mind-Body Skills, closely associated with the U.S-based Center for Mind-Body Medicine (CMBM). Naftali is a member of the CMBM International Training Faculty. International humanitarian relief is central to Naftali’s professional identity. In 2005, he was part of an Israeli team of trauma experts sent to train professionals in Sri Lanka in the aftermath of the Tsunami disaster. He consulted to professionals in the aftermath of the Katrina hurricane disaster. In 2010 he was part of a team of mental health experts organized by the Israel Trauma Coalition to train professionals in Haiti. He had returned repeatedly to Haiti as part of the CMBM relief and training efforts there. In 2012, Naftali was asked to join a USAID-funded, AJJDC project to develop psycho-social disaster readiness in Indonesia.

Since 1988, Tali Nachshoni, M.D., psychiatrist and psychotherapist, has treated a wide range of mainly adults with issues such as: affective disorders, psychotic disorders, anxiety disorders including PTSD and recently complex PTSD with dissociative features, personality disorders and comorbidities and a large variety of other mental health issues. Most of Tali's work is on-site at Beer Yaacov in the Partial Hospitalization unit where she serves as a Senior Psychiatrist. Off work, Tali is a wife and mother of 2 adult children, and she balances her work by being an avid movie goer, music lover (all kinds), ballroom dancer and traveler and snorkeler all over the world.

Keren Tzarfaty, M.F.T., Ph.D., is a certified Hakomi Therapist and Trainer as well as a somatic and transpersonal psychotherapist. Keren’s approach is grounded in traditional western psychologies and body oriented modalities (Gestalt, movement, trauma work) as well as inspired by Eastern and Shamanic spiritual traditions. She Holds a M.A. in Somatic Psychology and has a Ph.D. in East-West Psychology, both from the California Institute of Integral Studies in San Francisco. Keren has trained extensively in a combination of traditional and contemporary approaches and offers an integrative model of healing and growth. She has been a meditation practitioner for many years and is dedicated to living a fully embodied life grounded in spirit. In her practice she works with individuals, couples and families and leads mindfulness-based groups.

Dafna is an Acupuncturist and Holistic Therapist specializing in Korean Medicine, Yoga Therapy, and many kinds of massage. She has a private clinic in Tel Aviv, and works for Kupat-Holim Clalit and Holmes-Place Spa, previously working at Reut Hospital and Neve-Tzedek Spa. In the past she was a project manager, specializing in software localization and QA, Office manager, and Air Force Intelligence office. She has a B.A. in Philosophy and General Studies from Tel-Aviv University and hopes to finish her M.A. in Jewish Philosophy some day. She enjoys reading, Yoga, and juggling. Dafna can be contacted at This email address is being protected from spambots. You need JavaScript enabled to view it.

Anne-Marie Ulman, originally from Paris, France studied at the Pitie-Salpetriere Medical school, Paris, France and has served as Senior psychiatrist in Beer Yaakov Mental Center since 1995. She began in the close acute ward and since 2004 she practices in a chronic/rehabilitation ward as a Senior Psychiatrist specializing in Rehabilitation Psychiatry, since 2006 has been a member of the hospital "Rehabilitation Basket" commission. She also specializes in Ethnocultural consultations at the out-patient clinic and is in charge of Cultural and Linguistic Adaptation and Accessibility of Hospital services at Beer Yaakov. She was involved in a pilot study (funded by the Israel National Institute for Health Policy) on suicide prevention, which is an acute problem among people of Ethiopian origin in Israel. This study explores the place of cultural factors in diagnosis, treatment and prevention of suicidal behaviors. Anne-Marie is also teaching medical students and residents. In her private life Anne-Marie resides in Tel Aviv with her daughter and red-haired cat and until today remains fascinated by the study of identity.