Opportunities are everywhere for psychedelic science and medicine. From clinical trials and psychedelic harm reduction to upcoming events and headline news, I have exciting news to share with you in the September 2016 edition of the Multidisciplinary Association for Psychedelic Studies (MAPS) Email Newsletter.

On August 30, 2016, we submitted our formal End-of-Phase 2 meeting request to the U.S. Food and Drug Administration (FDA). The purpose of this meeting, to take place in Washington, D.C., will be coming to an agreement on the design of our upcoming Phase 3 trials, the final stage of research required to make MDMA-assisted psychotherapy a legal prescription treatment for PTSD.

Meanwhile, the Zendo Project psychedelic harm reduction service had our most successful year yet at Burning Man 2016, where staff and 200 volunteers provided 24-hour compassionate support for 430 attendees. Each of approximately 70,000 attendees received handouts describing the Zendo Project's services, principles, and location. We congratulate the Burning Man organization for becoming a leading model of psychedelic harm reduction services this year, and look forward to more extensive collaborations next year. The Zendo Project still needs your help—right now your donation will be doubled!

Also in this edition of the MAPS Email Newsletter:

Since our founding in 1986, MAPS has disbursed over $36 million to develop psychedelics and marijuana into prescription medicines for some of the most hard-to-treat illnesses and to educate the public honestly about the risks and benefits of these substances. Our success is made possible by individual donors and family foundations committed to our mission — thank you for leading the way.

4 Marijuana for PTSD: Marijuana Received from NIDA at Phoenix Site

10 Psychedelic Healing: The Promise of Entheogens for Psychotherapy and Spiritual Development by Neal M. Goldsmith, Ph.D.

Help provide compassionate care for difficult psychedelic experiences. Right now your donation to the Zendo Project will be doubled!

On August 30, 2016, the MAPS Public Benefit Corporation (MPBC) submitted a formal End of Phase 2 Meeting Request to the U.S. Food and Drug Administration (FDA) to propose meeting dates in October or November 2016. The goal of this meeting will be to come to an agreement on the design of our Phase 3 trials of MDMA-assisted psychotherapy for PTSD. We anticipate the FDA's response within 21 days. The submitted documents include a summary of clinical trial data supporting the request, and questions that will inform the design of our Clinical Development Plan to make MDMA-assisted psychotherapy a legal treatment option for people suffering from PTSD. Learn more...

On August 31, 2016, the formal site initiation meeting took place at the new Boulder, Colorado, site for our ongoing Phase 1 study of the psychological effects of MDMA when taken in a therapeutic setting by healthy volunteers. Enrollment in this study is limited to therapists in training to work on MAPS-sponsored clinical trials of MDMA-assisted psychotherapy for PTSD, with enrollment by invitation only. Marcela Ot'alora, M.A., L.P.C., is serving as Principal Investigator of the Boulder site. The original site led by Michael Mithoefer, M.D., in Charleston, South Carolina, will also continue enrolling and treating participants. Learn more...

On August 11, 2016, the U.S. Drug Enforcement Administration (DEA) announced their intention to grant licenses to additional marijuana growers for research, thereby ending the DEA-imposed 48-year monopoly on federally legal marijuana. Since 1968, the University of Mississippi, under contract to the National Institute on Drug Abuse (NIDA), has maintained the only facility in the United States with federal permission to grow marijuana for research. "It's a complete and total end of the NIDA monopoly!" says MAPS Founder and Executive Director Rick Doblin, Ph.D. "There has been no production monopoly on any other Schedule I substance, like MDMA or LSD-only the cannabis plant. Licensing non-government cannabis producers, and thereby creating a path to FDA approval, will finally facilitate the removal of marijuana from Schedule I." Learn more...

Marijuana for PTSD: Marijuana Received from NIDA at Phoenix Site

On August 25, 2016, Site Principal Investigator Sue Sisley, M.D., received the first shipment of marijuana from the National Institute on Drug Abuse (NIDA), at the Phoenix, Ariz., site of our upcoming trial of smoked marijuana for symptoms of PTSD in U.S. veterans. The marijuana arrived in dried bulk form, and will be analyzed by a secondary DEA-licensed laboratory for potency, mold and yeast testing. We currently expect to begin enrolling participants in September. Learn more...

On August 11, 2016, the 11th participant was enrolled in our ongoing study of MDMA-assisted psychotherapy for anxiety associated with life-threatening illness in Marin, Calif. Led by Principal Investigator Phil Wolfson, M.D., with co-therapist Julane Andries, LMFT, this study is gathering preliminary data about the safety and efficacy of MDMA-assisted psychotherapy for treating anxiety in 18 subjects diagnosed with a life-threatening illness. "Our study is progressing—13 subjects now —with wonderful experiences and gratifying changes in awareness, reductions of fear, self-worth, and relationships," reports Dr. Wolfson. "As our subjects have life-threatening illnesses, there is the unfortunate possibility of relapse or recurrence. With great sadness, we report the loss of one of our subjects to recurrent cancer. We are privileged to do this work in all its seriousness and great beauty." Learn more... 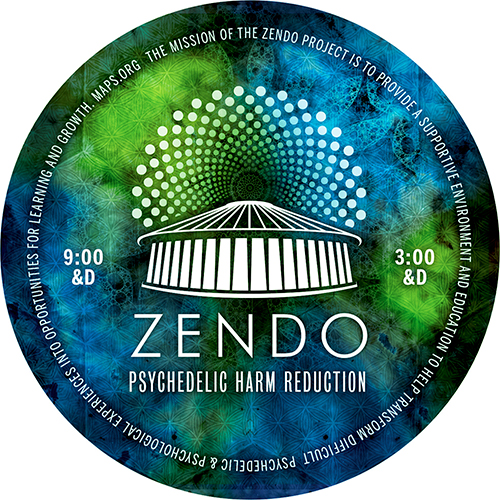 We still need your help to raise $30,000 of the $90,000 needed to fund the Zendo Project's psychedelic harm reduction services at Burning Man 2016, where staff and volunteers provided compassionate care for approximately 430 people undergoing difficult psychedelic experiences from August 29-September 5, 2016.

This year, Zendo Project Training and Education Coordinator Sara Gael, M.A., gave a well-received training to approximately 60 officers from the Bureau of Land Management (BLM), who along with Black Rock City Rangers were willing to bring people to the Zendo who needed assistance. The Zendo Project was also included in the official Burning Man 2016 Survival Guide, WhatWhereWhen guide, and event calendar. Approximately 250 people attended our on-playa psychedelic harm reduction training led by Zendo Project coordinators. As one attendee reported: "I came to your training, and even though I didn't volunteer with the Zendo this year, the tools you provided made me feel more capable of supporting someone in need."

"The Zendo Project and Burning Man Emergency Services Department (ESD) collaborated consistently during the course of the event," reports Sara Gael. "ESD has been incredibly supportive of the Zendo Project, educating their staff and volunteers on harm reduction methods and helping to coordinate the Zendo training with the BLM. The Zendo was located near medical, making triage and communication more effective than in previous years. Across departments, harm reduction principles and philosophy became much more integrated into the safety plan of Burning Man organization. We see a shift taking place and are confident that this integration will continue in the years to come."

More event producers are recognizing the need for psychedelic harm reduction services at their events and asking for our services-we need your help to get there. The RiverStyx Foundation will match the first $15,000 in gifts to the Zendo Project. Double your donation!

In August 2016, MAPS received nearly $148,000 in new donations from 320 supporters. This past month, we launched our summer fundraising campaign for the Zendo Project, and so far have raised $17,612, with $6,194 remaining of a $15,000 matching pledge. You can still double your donation by giving to the Zendo Project now!

We extend a special thanks to those who so generously supported MAPS this past month:

MAPS relies on the generosity of individual donors to achieve our mission. Psychedelic science is again being conducted under federal guidelines, but no funding for psychedelic psychotherapy research is yet available from governments or major foundations. Learn how to how to include MAPS in your will or estate plans. Learn more about hosting a Global Psychedelic Dinner to bring your community together in support of psychedelic science and medicine. 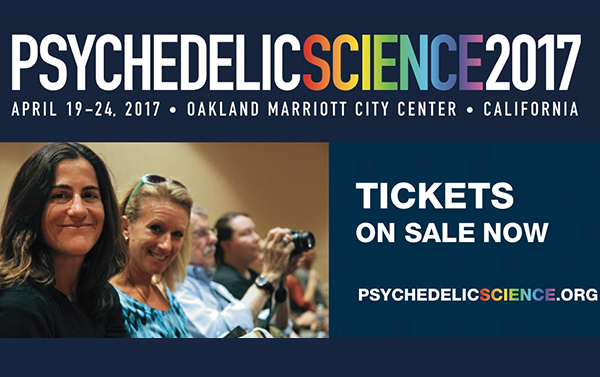 Stay warm and show your support for MAPS in this stylish and extremely soft hooded fleece.

Made in the USA and screen-printed by hand in Santa Cruz, Calif., by local artist Clay Chollar. Available in limited sizes and quantities.

Psychedelic Healing: The Promise of Entheogens for Psychotherapy and Spiritual Development

"In this book, Neal Goldsmith shares the personal story of his own process of growth and transformation as both a drug policy analyst and a psychotherapist and boldly calls for the acceptance and integration of psychedelics into psychiatry and society as the powerful catalysts for self-exploration and healing that they are."—Dennis McKenna, Ph.D., assistant professor, Center for Spirituality and Healing, University of Minnesota

You are warmly invited to a dinner and soirée on Saturday, October 8, 2016, in Soho, New York City. Join us for an evening of exquisite food, fine wine, gracious hospitality, and the company of like-minded individuals. MAPS Founder and Executive Director Rick Doblin, Ph.D., will hold an intimate conversation about the path to legalizing psychedelic medicine and his vision of a post-prohibition world. Leading MAPS researchers will also join in the conversation. Learn More | Buy Tickets

MAPS Founder and Executive Director Rick Doblin, Ph.D., will present at Beyond Psychedelics, the first global psychedelic forum in Czech Republic. The event will provide outside-the-box discussions on the approaches to working with psychedelics and the positions these substances hold in our modern society. Register...

MAPS Founder and Executive Director Rick Doblin, Ph.D., will give the keynote address at this year's forum. Highlighted topics will include the current state of MDMA research for alleviating PTSD; ayahuasca therapy to treat eating disorders; psilocybin studies and their implications for cancer patients and end-of-life issues; training possibilities for psychedelic psychotherapists; and how to support clients in successfully integrating the psychedelic experience. Register...

MAPS is a proud co-sponsor of the 2016 World Ayahuasca Conference. Two years after the first World Ayahuasca Conference, held in Ibiza, Spain, the international ayahuasca community will come together in the spirit of the dialogue and exchange of knowledge and experience initiated in the first edition. In times of a rapid globalization of the use of ayahuasca, the dialogue about cultural recognition and protection of traditional practices worldwide is more important than ever. Register... 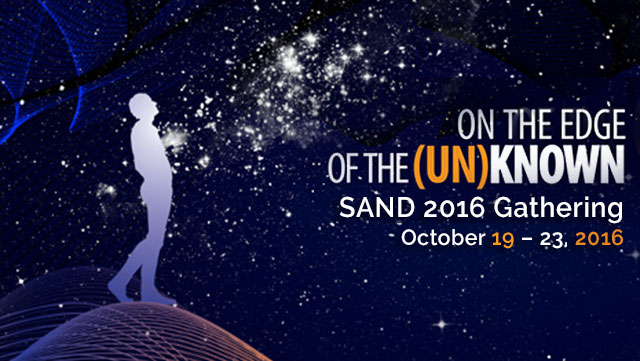 MAPS is a proud partner of the 2016 Science and Nonduality (SAND) Gathering, which provides a forum where preeminent scientists, philosophers, teachers, artists, and the international community gather to explore and advance the new paradigm emerging in spirituality, that is both grounded in cutting-edge science and consistent with the ancient wisdom of Nonduality—the deep understanding of the interconnectedness of life. This year's theme is “On the Edge of the Unknown." MAPS researcher Ben Shechet will facilitate a community discussion on “Psychedelics: Tools for Exploration & Well-Being." Learn more and register...