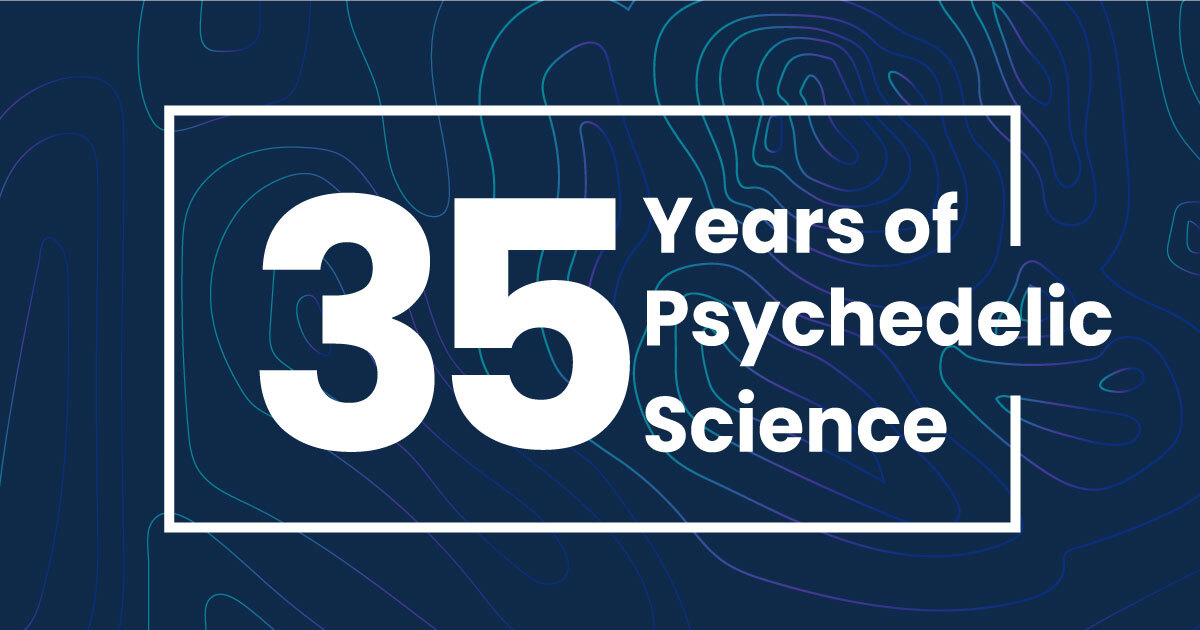 This April, the Multidisciplinary Association for Psychedelic Studies (MAPS) is celebrating the 35th anniversary of being a non-profit research and educational organization that develops medical, legal, and cultural contexts for people to benefit from the careful uses of psychedelics and marijuana.

Founded by Rick Doblin, Ph.D., on April 8, 1986, MAPS was born out of the need for more research into the benefits and risks of psychedelic medicine.

On Thursday, April 8, donors and members are invited to join us for a virtual MAPS anniversary event starting at 12:00 PM (PST).

As we approach our 35th anniversary, we are taking this opportunity to share selected highlights from each year of MAPS’ existence and integrate our history.

Following MAPS’ first year as a non-profit organization, support for MDMA research increased and MAPS collaborated on a study protocol with researchers at Johns Hopkins University.

MAPS continued to publish Bulletin articles about MDMA research, requests for donations, and discontinuing animal studies. A study on neuroendocrine and mood responses to intravenous L-tryptophan in MDMA users was also published.

MAPS announced the first protocol for MDMA-assisted therapy in terminal cancer participants suffering from clinically diagnosed anxiety and depression, and MAPS received a $10,000 donation toward an annual budget of less than $50,000.

MAPS hired Sylvia Thyssen as our first employee, celebrated the 50th anniversary of LSD, outlined perspectives on drug policy, and worked toward facilitating a pilot study for medical marijuana.

MAPS revealed our organizational strategy, introduced our clinical plan for marijuana research, and started exploring the possibility of conducting research in Israel. Members of Congress voiced support for marijuana/AIDS research.

MAPS initiated a study on the efficacy of ketamine-assisted psychotherapy for heroin dependence in Russia and resumed working on a protocol for MDMA-assisted therapy for anxiety associated with cancer.

MAPS completed the first Phase 1 safety study with MDMA and resumed working on a protocol for anxiety associated with cancer. The first medical marijuana bills were passed in California and Arizona.

MAPS published our first book, The Secret Chief: Conversations with a Pioneer of the Underground Psychedelic Therapy Movement by Myron J. Stolaroff. Researcher Donald Abrams received a $1 million grant to study the risks of marijuana.

MAPS initiated the world's first clinical trial to evaluate the safety and effectiveness of MDMA-assisted psychotherapy for PTSD, which took place in Madrid, Spain.

Rick Doblin, Ph.D., and Michael Mithoefer, M.D., met for the first time and decided to work on MDMA/PTSD research in the U.S. The Spanish Ministry of Health accepted the first-ever controlled study of the therapeutic use of MDMA, later to be shut down.

The FDA received MAPS’ protocol for a new study of MDMA-assisted therapy for PTSD. Lyle Craker, Ph.D., submitted his first DEA application to manufacture marijuana for use in medical research.

George Ricaurte published a paper on the neurotoxic effects of MDMA in primates, which was later retracted due to a drug labeling error. Media coverage of the paper led to a new stigma and political pressure ended the Spain MDMA study.

The journal Science retracted George Ricaurte’s paper on the neurotoxic effects of MDMA in primates after MAPS sent multiple letters to the journal and an investigation revealed that the data were invalid due to a drug labeling error.

MAPS submitted a protocol of MDMA-assisted therapy for PTSD in Switzerland, hearings were initiated for MAPS’ lawsuit against the DEA for obstructing marijuana research, and the Catharsis on the Mall event was envisioned by MAPS Founder Rick Doblin, Ph.D.

MAPS and Dr. Peter Gasser initiated a Phase 2 clinical trial of LSD-assisted psychotherapy for the treatment of anxiety associated with advanced-stage illness in Switzerland.

A shipment of LSD arrived in Switzerland for our study of LSD-assisted psychotherapy for anxiety associated with advanced-stage illness. CNN and Dr. Sanjay Gupta produced a TV report about the potential benefits of MDMA-assisted therapy.

Health Canada agreed to the protocol for a study of MDMA-assisted therapy for PTSD in Vancouver. Members of the U.S. Congress wrote letters in support of Lyle Craker’s application to grow marijuana for medical research.

MAPS published strong results from the first Phase 2 pilot study of MDMA-assisted therapy for PTSD and we increased work on securing a DEA permit for Lyle Craker to cultivate marijuana for research and break the government monopoly on the supply of research-grade marijuana. MAPS also started research into ibogaine for opiate addiction.

MAPS started research into ayahuasca for addiction, and the late Ashawna Hailey provided a donation of $5.5 million in the form of a bequest.

The Zendo Project was created by MAPS to provide psychedelic peer support, harm reduction, and education for the Burning Man community in Black Rock City, Nevada.

MAPS published promising results from our studies of MDMA-assisted therapy for PTSD in Switzerland and ayahuasca for addiction. Over 1,500 people from around the world attended MAPS' Psychedelic Science 2013 conference in Oakland, CA.

MAPS published results from the first study of LSD therapy in over 40 years. Later that year, MAPS received a $2 million grant from the state of Colorado for marijuana research and MAPS Public Benefit Corporation (MAPS PBC) was founded.

The MDMA Therapy Training Program was created to train the next generation of psychedelic therapists. Reddit awarded $82,765.95 to MAPS and nine other non-profit organizations chosen by the Reddit community.

MAPS initiated a study of Cognitive-Behavioral Conjoint Therapy (CBCT) integrated with MDMA-assisted therapy for PTSD in couples. The MAPS community raised over $140,000 in donations by hosting more than 80 Global Psychedelic Dinners.

MAPS successfully raised $8 million through the completion of the Pineapple Fund's $4 million matching grant. How to Change Your Mind by Michael Pollan highlighted MAPS’ research and introduced a wide audience to psychedelic science.

The FDA agreed to an expanded access program for MDMA-assisted therapy for PTSD, MAPS donors raised $30 million for psychedelic research during the Capstone Campaign, and we announced the positive result from our first Phase 3 trial.

In 2021, MAPS will be publishing the full results from our first Phase 3 clinical trial of MDMA-assisted therapy for PTSD and launching a new membership program for donors. MAPS continues to be a leader in the field of psychedelic science.

Through support from our community, we have achieved many great things. Thank you so much for being with us on this journey.