The Elephant in the Room: The Need to Address Race in Psychedelic Research

Earlier this year, I was awarded a Perspectives Scholarship by MAPS to attend the Psychedelic Science 2017 conference (psychedelicscience.org), and to help deliver a Community Forum called “White Allies and Anti-Racist Practice in the Psychedelic Community.” I was honored to do this, as I believe that psychedelic research has the potential to heal trauma and create positive social change in the world. From my experience at the conference, I also saw that more work has to be done to ensure that systemic patterns of oppression, including racism, stop being reproduced in the psychedelic research community.

In 2016, Psymposia (psymposia.com) released a number of articles commenting on the lack of diversity in psychedelic research. In order for psychedelic research to benefit the people that need it most, it must become more inclusive. In the current political climate, it is important to reflect on how we can play an active role in creating an equitable world free from racism and xenophobia. In this piece, I will reflect on some of my thoughts from the conference, the community forum, and some useful feedback that was generated.

Psychedelic Science 2017 was a thought provoking and inspiring conference. I was fascinated by the research being conducted and the scope for healing conditions such as anxiety and depression that affect so many people. However, I did notice the vast underrepresentation of people of color at the conference, both in terms of presenters and attendees. Furthermore, most of the research presented did not include participants of color or members of the LGBTQ community. Personally, I would have appreciated a room for people of color at the conference to be with each other, discuss these issues, and at least one meet-up event over the weekend. Hopefully this can be incorporated in the future.

As we know from the ongoing research, psychedelic medicines can be particularly adept at healing trauma including PTSD, anxiety and depression. In light of this, I found it peculiar that so few studies discussed included people of color (POC) or those from the LGBTQ community. People from these demographics have disproportionately higher rates of trauma than white people in the USA. According to the Grady Trauma Project, which conducts research in Atlanta, African American populations have higher rates of PTSD than veterans returning from Iraq, Afghanistan, or Vietnam. Therefore it was disappointing that only a single community forum on intersectionality and trauma in POC communities was programmed. It is clear to me that there is not enough focus on prioritizing support to those that are disproportionately affected by PTSD, and other forms of trauma relating to oppression, in the USA.

On Saturday I co-facilitated, with Zoe Bender, the community forum “White Allies and Anti-Racist Practice in the Psychedelic Community.” The room quickly filled with over 50 people, and many more waited outside hoping to get in. According to Renae Stowell, the community forum coordinator, it was the most popular forum at the conference. There is a clear need for further conversations and workshops about racism and oppression in the psychedelic science context. I began doing anti-racism training and consultancy after living in the San Francisco Bay area for two years and being inspired by organizations such as The Catalyst Project and Showing Up for Racial Justice (SURJ). After moving back to England, I found that compassionate, experiential anti-racism work was needed to help people respond to the wave of xenophobia and racism unleashed after the Brexit vote.

Our 90-minute session at Psychedelic Science 2017 was based on my UK workshops. These workshops are experiential, comprised of a variety of group exercises, discussion circles, and active listening to explore this material with a compassionate approach. Participants explore their relationship to privilege and learn about how racism functions in their cultural context. They leave equipped with strategies to support people of color experiencing racism and ways to work with white people to dismantle racism in their communities. In the workshops, we acknowledge that racism and other forms of oppression are often internalized in the body and linked to strong emotions such as anger, guilt, and shame.

Through these discussions in our workshop, we created a safe container to explore these emotions as they arose. This experiential approach is incredibly effective, as workshops focused on academic knowledge, facts, or figures, can often make subjects such as racism seem abstract rather than personal and applicable to our everyday lives. Racism, sexism, and other forms of oppression are deeply rooted in our emotions, bodies, and unconscious behavior. Therefore it is important to provide space to talk about and share the emotions that arise when we engage with this material and explore methods to create change.

Towards the end of the forum, I went into a separate space with all participants of color and asked them what they would change at future Psychedelic Science conferences and in the wider research being undertaken in the community. The feedback was really interesting and I hope that it will be incorporated. They included: 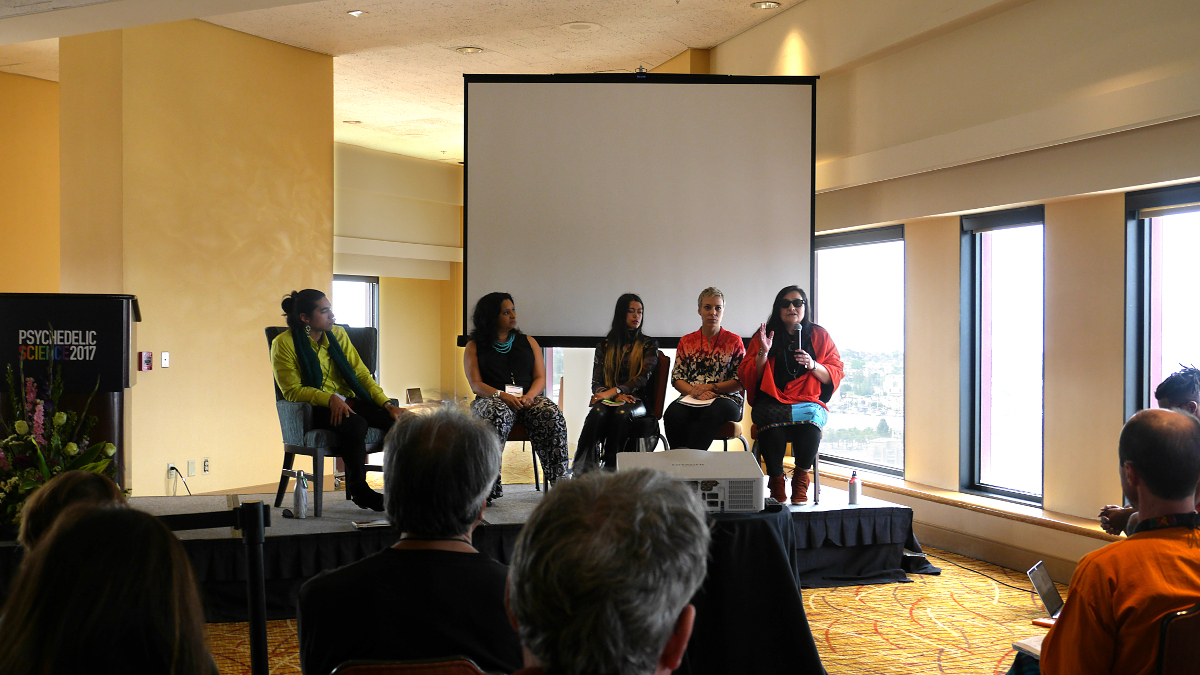 Most participants gave positive feedback and found the community forum powerful. Ninety minutes is not enough time to go particularly deep into the subject matter, and it certainly will not instantly transform racism in the psychedelic community. However, the success of this session and its popularity demonstrates that conversations like this need to be taking place.

The panel “Psychedelics, Injustice and the Intersectionality of Trauma” provided a necessary space to discuss the issues of diversity in the clinical research context. There was a buzz in the room and again, a sense that many participants have been waiting to have these conversations and take proactive steps to improve things.

Robin Carhart Harris suggests that Psychedelic medicine may increase cognitive flexibility, leading to open mindedness and the potential for positive social change. This assumption may encourage people to become complacent and believe that they are separate from the dominant culture that needs to shift. It allows people to point the finger and say, “It’s those people over there that are causing the problem, not us.” However, just as we all have a responsibility protect the natural world and prevent the impending impacts of climate change, we all have a responsibility to actively redress the power imbalances caused by a legacy of slavery and colonialism in the United States. I urge you to reflect and ask the uncomfortable questions: How might I be complicit in perpetuating oppression? Which voices do not have a seat at the table in my work, organization, or community and how can these perspectives be acknowledged and included? How can we respect and listen to other viewpoints and compassionately change entrenched patterns of oppression and dominance?

I hope that this provides some food for thought, continues the conversation, and allows us to ensure that psychedelic research is helping those that need it most, and actively creating positive social change in the world. 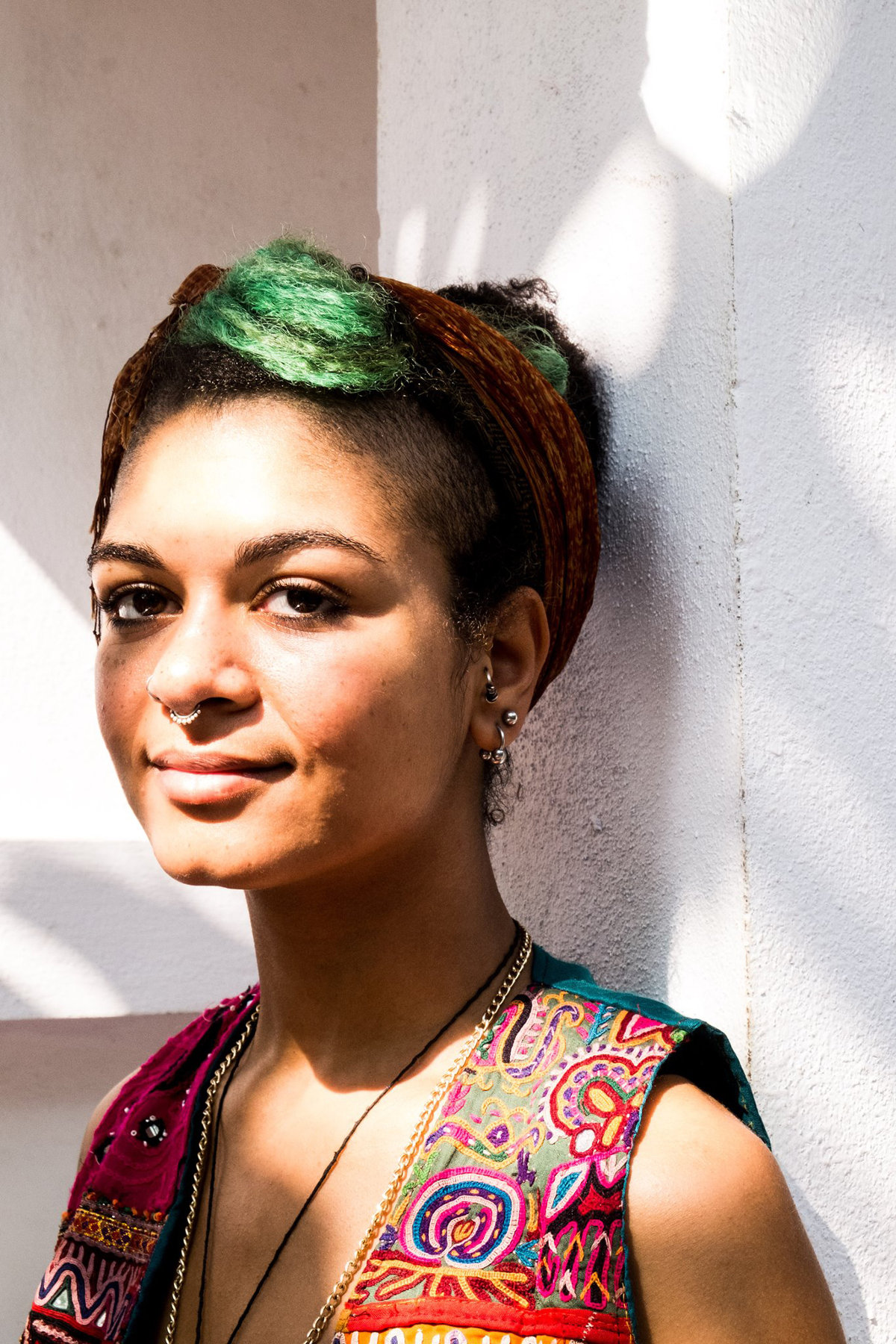 Camille Barton is a movement artist and diversity consultant based in the UK. She has delivered training and consultancy for numerous universities and non profits including the Global Scholars Symposium at The University of Cambridge, SOAS and The University of Sussex. Camille has an experiential, compassionate approach to diversity work which aims to educate people about oppression and provide them with strategies to transform racism and sexism in their communities or research projects. Camille co-facilitated a workshop at Psychedelic Science 2017 called “white allies and anti-racist practise in the psychedelic community”. Having studied International Relations at The University of Sussex, Camille understands global power dynamics but is most passionate about how the fusion of art and politics can lead to social change. While living in The USA she was inspired by training in restorative justice and peer counselling which supported her work as a youth worker in West Oakland.