Ecstasy Use ‘Link’ to Depression

Read commentary on study discussed in this news article

View a full-text copy of the paper (PDF). 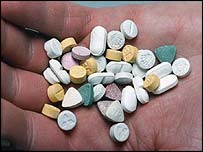 Heavy ecstasy use is linked to an increase in depressive symptoms in some people, a study suggests.

A Cambridge University team studied 124 people and found those with a certain genetic make-up showed greater signs of depression after using the drug.

The scientists, writing in the American Journal of Psychiatry, said it could show how vulnerable ecstasy users are to long-term psychiatric problems.

Up to two million ecstasy tablets are taken in England each week.

The researchers said heavy users, such as the people they studied, would probably be using ecstasy every week.

Previous studies have suggested ecstasy users may experience an unpleasant lowering of mood for up to three days after taking the drug.

There have also been suggestions that ecstasy can cause episodes of severe depression.

Ecstasy is known to affect serotonin, a key brain chemical in the regulation of mood and emotion

The Cambridge team looked at 66 ecstasy users, 30 cannabis users and 28 healthy volunteers who had not used any drug.

They looked at the gene which controls serotonin transporters in the brain.

Everybody has two copies of each gene, and there are two possible versions which people can carry, so they can either be classed as ll, ls or ss.

They also used a recognised depression measurement scale to assess people, and carried out an emotion recognition computer test, – where people are asked to respond rapidly to happy or sad words.

Some 60% of people who had the ss version were assessed as having at least mild depression. They were also less likely to give the expected response in the emotional processing test.

Non-drug users with the ss type displayed no such problems.

And no differences were seen among cannabis users who belonged to the different genetic groups.

Dr Jonathan Roiser, now based at the US National Institutes of Mental Health in Bethesda, told the BBC News Website: “There is evidence here that ecstasy use can result in depression in some vulnerable people.

He said people were unlikely to know what genotype they were, and therefore if they were at high risk.

But he added: “There is some evidence that people with the ss genotype have more family members who are depressed.

“People with the ss type have also been associated with depression in response to stressful life events, such as losing a family member or a job.

“It may be that ecstasy is another type of stressors, albeit one which has a more direct effect on the brain.”

And he said that, while the research had looked at heavy users: “if people who are casual users have that kind of family history, they should think twice about continuing to take ecstasy.”

“This is the first study to pick out a distinct subgroup of ecstasy users who have changes in brain function after using the drug.”

BBC On-Line published an article describing recently published findings that ecstasy use was associated with increased self-reported symptoms of depression, but only in people who have a certain form of the serotonin transporter gene. You can also read a commentary on the paper.