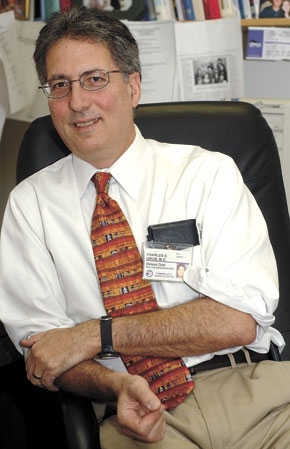 While participating in a sacramental ceremony in the Amazon basin of South America during the late 1980s, Dr. Charles Grob had a moment of realization about the power of psychedelic substances used for therapeutic purposes.

Grob, the director of the division of child and adolescent psychiatry at the Harbor-UCLA Medical Center, was at the time investigating the effects of the hallucinogenic concoction called “ayahuasca” on a religious community in the Brazilian tropics a substance he had tried himself while in Brazil.

Grob, who is currently conducting a study of the effects of psilocybin (the chemical found in “magic mushrooms”) on terminally ill cancer patients, said he observed the hallucinating Brazilian congregation’s heightened receptiveness to accepting the maestre’s (priest) sermon of leading a moral and responsible life. Many of these congregants had “risen from being at the bottom of society and reformed their lives” after attending the ceremonies, Grob said, leading him to be confident in the potential benefits of psychedelic drugs.

Grob said the scene illustrates the importance of subjects’ states of mind and the external environment when administering psychedelic drugs on patients a philosophy that Grob uses in his 2004 study of psychedelics on cancer patients nearing death.

Grob’s study has attracted new attention as a predecessor to a Harvard Medical School study approved in December by the Food and Drug Administration that will test the effects of the psychedelic drug MDMA also on terminally ill cancer patients. MDMA is better known as the mind-altering drug ecstasy.

The research having taken a hiatus for over 20 years, the last decade has seen a slow resurgence of psychedelic research exciting the few psychiatrists that believe in hallucinogen-induced therapy across the country.

Dr. John Halpern, the psychiatrist heading the study at Harvard, says he embarked on the research out of a blend of curiosity and a desire to help people. From past research and anecdotal experiences, Halpern has confidence in the abilities of MDMA to ease the anxiety of patients nearing death.

Halpern and a team of four doctors are currently waiting on a special Schedule 1 license from the Drug Enforcement Agency to begin administering the test. According to the Controlled Substances Act of 1970, Schedule 1 drugs which include heroin, ecstasy, LSD, marijuana and psilocybin, among other drugs have a high potential for abuse and have no currently known medical use.

Though Halpern’s study has needed to undergo “many layers of approval,” the psychiatrist says the checks are all necessary and expects DEA approval to come within the next two months.

Once a study is approved, the psychiatric team faces the often difficult task of recruiting subjects.

In Grob’s case, finding suitable patients has been challenging because of the strict screening process and reluctance on the patients’ part to undergo a study that acknowledges their unfortunate situations.

On the patient’s end

When a patient comes in to participate in Grob’s study, they are taken to a Harbor-UCLA hospital room adorned with pink and lace curtains and purple tie-dye decorations to create a comforting atmosphere in which the hallucinogenic psychotherapy can occur.Sitting in his cluttered office surrounded by marker-drawings by his daughter, Grob emphasizes that the aim of the treatment is in no way a physical cure to the disease. It is aimed more at easing feelings of depression and anxiety as patients get closer to death, he says.

Many in UCLA’s psychiatry community also believe in the value of the study.

“We are all going to die. A lot of people are sufficiently afraid of dying so that the prospects of death are stressful,” said Mark Kleiman, director of the Drug Policy Analysis Program at UCLA. “This is an unusually good time to think about things that could be done to give people an easier and mindful time of it as they are dying,” Kleiman said, referring to the baby boomer generation reaching old age.

A patient participating in Grob’s study undergoes two sessions of drug administration taking a capsule of psilocybin during one session and a placebo in a second session.

Though Grob’s study allows the evaluation of 20 patients, only three have been tested. Two more were scheduled to be studied, but died before the screening process was over, Grob said.

In the Harvard study, 12 patients will be chosen to undergo MDMA administration in conjunction with psychotherapy, Halpern said. The drug may allow the patients to mobilize and talk about issues that would otherwise induce a panic reaction.

The drug could induce “a sense of empathy, a feeling of well-being and interconnectedness; and lack of stress will allow the participant to deepen the effects of psychotherapy,” he said.

A similar study conducted by Dr. Francisco Moreno at the University of Arizona tested the effects of psilocybin psychotherapy on patients with obsessive compulsive disorder. The study was completed in December and Moreno hopes to have the data analyzed and published shortly, he wrote in an e-mail.

“We are encouraged by the observations and hope to continue this line of research to favor the development of new therapeutics for this disabling disorder,” he wrote.

There was a time when psychiatric therapy was at “the cutting edge” of scientific research, Grob says, but had all but vanished from the medical community’s radar for the last 25 years.

With its roots in Shamanistic traditions and dating all the way back to antiquity, psychedelic drugs were discovered by Western scientists in the 1940s centuries after European conquerors repressed their use due to fears of pagan influence, all according to an article written by Grob.

But this widespread research experienced a blow in the 1960s and ’70s when hallucinogen use spread rampantly among the youth of the time and law officials began to curb scientific uses of the substances.

With the force of law against them, many researchers were encouraged to stop their work until it eventually faded as a legitimate science.

But, with FDA approval coming to Dr. Michael Mithoefer, a psychiatrist in South Carolina, to test the effects of MDMA on patients with post traumatic stress disorder in 2001, psychedelic research seemed to be re-emerging. “As the sleeping giant of hallucigonogen research emerges …, it will perceive that the world of psychiatry has vastly changed from when it was put to rest,” Grob wrote in 1998.

Most psychedelic researchers agree that with the methodology and technology available today, hallucinogenic therapy has the potential to be grounded on sounder evidence than in the past.

“Why should psychedelics have no medical utility?” he asks. “The question is where and how we should use it.”

Though psychedelic research has seen a new emergence in the last decade, Halpern says studies in psychedelic therapy are rare in the country “I can count them all in one hand.”

And there is always the skeptic who believes that the dangers that hallucinogens pose to society far outweigh the potential benefits.

Overall, most in academia are not opposed to the learning opportunity psychedelic research provides.

“No body knows whether it is a goo
d or not until the research is done,” Kleiman said.

And in the face of several barriers, Halpern emphasizes “you better know what you are doing,”

Read more about psychdelic research, including all four of the studies described above..

The UCLA newspaper the Daily Bruin featured a report on Charles Grob’s research on psilocybin in people with cancer experiencing anxiety relating to their illness. The piece quoted Grob and Dr. John Halpern, the principal investigator of the MAPS-sponsored study of MDMA in people with cancer-related anxiety.